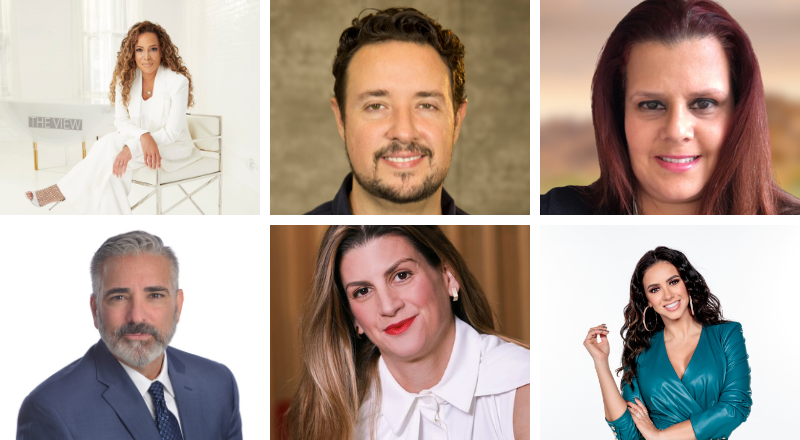 NEW YORK, August 25, 2022 – The producers of the 20th Annual Hispanic Television Summit have announced the five recipients selected for this year’s prestigious Hispanic Television Awards to be presented on Wednesday, September 14 at ETC Venues, 360 Madison Avenue in New York City.  The awards ceremony, which is scheduled for midday in the Summit’s agenda, will be hosted by Ana Jurka, Telemundo’s female commentator for November’s FIFA World Cup in Qatar. The Hispanic Television Summit is presented annually by Broadcasting & Cable and Multichannel News as part of NYC TV Week.

This year’s award recipients include Sunny Hostin, the three-time Emmy winning co-host of ABC’s The View, and best-selling author who will receive the summit’s legacy Award for Outstanding Achievement in Hispanic Television. She is being recognized for her contribution as a leading voice for Hispanic culture on television. Ms. Hostin will be joining a unique “club” with other notables who have previously been recognized with this award including variety and talk show personalities Don Francisco, and Cristina Saralegui, Lili Estefan, and Raul De Molina. There have also been newscasters including Jorge Ramos, Maria Elena Salinas, Jose Diaz Balart and Maria Celeste Arraras, sports personalities like Oscar De La Hoya and Andres Cantor, and actors including Diego Luna, Ana de la Reguera, Rafael Amaya, and Lucero.

Two more awards are given to companies that are pioneers who have long played a role in the business of television for Hispanics, and continue to make a significant contribution. These awards are given in the name of the late Rafael Eli, a co-producer of the Summit who passed from Covid in 2020.  The Rafael Eli Award for Pioneer in Hispanic Television in the Agency Category will be presented to ORCI, which has long been a multicultural agency creating culturally-relevant advertising campaigns, including television, for leading brands. The award will be accepted on behalf of the agency, by Marina Filippelli, President of Orci. The other Award for Pioneer in Hispanic Television, given in the Media Category, will be presented to PRODU, a publication that for over 30 years has reported on the latest programming deals in the Latin American and US Hispanic television industry . The award will be  accepted by Maribel Ramos-Weiner, Senior Editorial Director and Amy Ibarra,  Senior Director for the Television Division on behalf of Richard Izarra, the owner and president of the international media publication.

The annual award recipients are selected by a committee inclusive of industry leaders, members of the editorial team at Broadcasting & Cable and Multichannel News as well as the producers of the event. “This year’s recipients are a true reflection of our theme of Embracing Our Culture,” said Joe Schramm, the Summit’s producer for all twenty years and president of Schramm Marketing Group. He continued, “I know that each recipient is proud of their heritage. They are an excellent voice for Hispanic television audiences. Yet, I am most inspired by how personally proud each is to be receiving the award. They truly deserve this acknowledgement.”

The 20th Annual Hispanic Television Summit will return this year as a one-day conference to be presented in-person. It will feature a state of Hispanic media address by Gonzalo Del Fa, president of GroupM Multicultural and an opening keynote with Gio Benitez, transportation correspondent for ABC News. Additionally, there will be a presentation of the latest cultural research, audience marketing and promotions, and multiple sessions on streaming. The summit will be attended by leaders in the business of television for Hispanic audiences from advertising, brands, production, programming acquisition, broadcast, cable and streaming, marketing, promotion, research and financial investment. For more information about the program or to review the agenda, please go to https://www.nyctvweek.com/2022/HispanicTV

Hispanic Television Summit is part of NYC TV Week 2022 by Future publications including Next TV, B+C and Multichannel News. Advanced Advertising Summit and Next TV Summit are also happening at NYC TV Week 2022.

Future is a global multi-platform media company and leading digital publisher, with scalable brands and diversified revenue streams. Every month, it connects over 300 million people worldwide with their passions, through expert content, world-class events and cutting-edge proprietary technology. Every year, Future attracts millions of consumers to its brands’ websites, magazines, events and social spaces. To learn more about Future visit www.futureplc.com

Schramm Marketing Group is a marketing agency based in the New York City metro area. It was founded in 1993 by cable TV marketer Joe Schramm. The company produces conferences for the television industry, promotes pay television and sports, notably international soccer, consults on multicultural markets, and sells sponsorships.  Its clients are leading brands in sports, television, entertainment, trade associations and nonprofits. www.schrammnyc,com

We are here to take you to your next